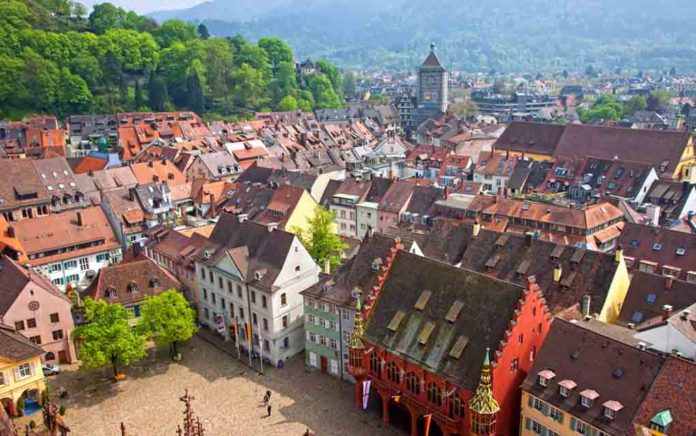 Freiburg, Germany is a gem of a city. It’s beautiful, clean, cozy, and provides an ideal environment in which to immerse yourself in German culture and language. (I know – I spent a year of study abroad in Freiburg to learn German!) If you study abroad in Freiburg, in the fall and winter you will find yourself immersed in charm. The sights, smells, sounds, and decorations (especially around Christmas time) will be something memorable and exciting that you have never experienced before. Freiburg also enjoys some of Germany’s best weather. In the spring and summer you will likely find tons of hot, sunny days and plenty of people lazing around in the many cafes you find in Freiburg.

ABOUT FREIBURG
Freiburg is an excellent destination to learn German and to study abroad. It is home to the Albert-Ludwigs-Universität. It is also home to several German language schools that offer immersion / intensive German courses (I attended one, as well, as was able to pass the German language exam after only 5 months of German study – passing the German as a Foreign Language exam allowed me to enroll as a visiting student at the Albert-Ludwigs-Universität).
The combination of students, academia, international language students, and a rich history have resulted in an excellent academic and cultural environment. And it’s fun! Freiburg is a relatively small city but never lacking in things to do. Freiburg’s status as a university city and is a popular (secretly, popular somehow!) destination to learn German means Freiburg has plenty to do for students – and for everyone else, too. In Freiburg you will find cafes, restaurants (and some great food!), great book stores, all sorts of activities for students, great weather, and a great location for those who want to visit other places.

Freiburg is located in south western Germany — so in the bottom left hand of the map. It is one hour away by train from Basel, Switzerland, about 8 hours by train through Switzerland (a beautiful trip!) to Milan, Italy, and very close to the French border (Strasbourg being the closest notable French city). You can also take awesome train trips up along the Rhine River – it’s scenic, filled with castles and interesting small towns, and leads up to notable cites such as Bonn, and Cologne (Köln) further to the north.

GETTING AROUND
Getting around Freiburg is easy. German students do it on their bicycles – you’ll see tons of those. But if you are not planning on bringing your bike, don’t worry. All of the neighborhoods in Freiburg are well connected via Straßenbahnen (street cars) and buses. And once you are in the city center everything is within walking distance.
ACADEMIC STUFF IN FREIBURG
In Freiburg you will find the Albert-Ludwigs-Universität (the University of Freiburg), the Protestant university for Applied Sciences Freiburg, the Freiburg Music Academy, the International University of Cooperative Education, and several notable research institutes. There are also several German language schools where you can learn German.  Albert-Ludwigs-Universität Universität (the University of Freiburg) EUer Sprachzentrum (German Language School) Sprachenkolleg für Ausländische Studierende (German Language School) Sprachschule zum Ehrstein (German Language School)