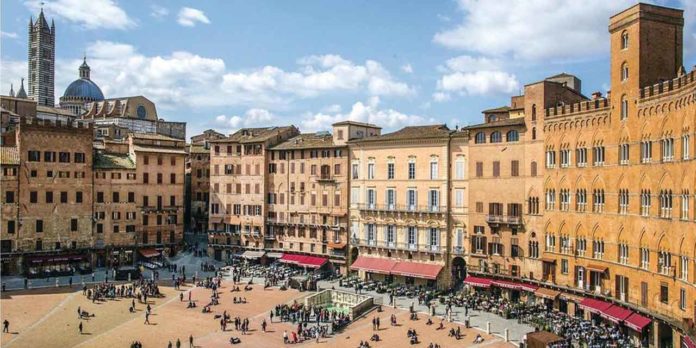 Siena is one of Italy’s easiest cities to study abroad or learn Italian in. It’s a good-sized city – not too big and not too small. It is well situated, in the middle of Tuscany, which is just beautiful. It lies between Florence and Rome (closer to Florence) and is well-connected by bus and train to the rest of Italy.

Smaller than Rome and Florence, Siena has a cozier feel to it. You will feel quite at home in Siena – and relatively quick at that! Everything is within walking distance. Il Campo, Siena’s world famous plaza, is the heart of the city and is a place where you will, without any doubt, gather with your friends and classmates. When you study abroad in Siena, it’s hard to walk through Il Campo and not bump into a familiar face.

Siena is a walled, hilltop city. Settled by the Etruscans, it sits atop 3 hills. It’s protective city walls enclose the city to this day (though you will forget all about them when you are living in Siena).

It is a city with windy Medieval streets which will take you back centuries when you walk through them. Lining those streets and within the city center are impressive buildings, churches, Siena’s cathedral, Il Campo, and other amazing sights.

Siena is home to the Università degli Studi di Siena and the Università Italiana per Stranieri, which specializes in Italian language teaching to foreigners. Siena has a markedly different feel to it during the academic year, when the city is bustling with students, than during the summer months, when tourists are more noticeable than students.

Siena is a popular city in which to learn Italian. In addition to the Università Italiana per Stranieri, there are several Italian language schools that specialize in teaching Italian to foreigners.

Throughout the year you will find international students in Siena, spending time in Il Campo, lounging in the cafes, enjoying the many restaurants and great Italian food, and immersing themselves in Italian culture and the Italian language.

WELL CONNECTEDIt is worth mentioning again that Siena is well-connected by bus and train to the rest of Italy. This makes it much easier take weekend excursions and other trips from Siena than other similar cities (just slightly off the beaten-track). Florence, Rome, Elba, and all other destinations in Italy can be easily reached from Siena.